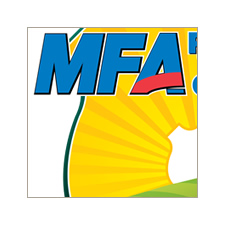 Kickoff theme logos are an annual project at MFA Incorporated. The kickoff committee selects a theme in the spring, and I’m given about six weeks to develop logo concepts, one of which is selected for development into the final logo. In 2014, the above logo (as a concept) was developed for the theme “___”. This concept was so well-received by the committee that they rewrote the year’s theme to be “Rising to the Challenge”, which they felt was a better fit for the artwork presented. (This is something which has never happened before—the logo inspiring the theme rather than vice versa.)

In spring of 2015, the committee decided the current year’s logo was so effective that instead of replacing it for 2016, they would continue to use it for three consecutive years.