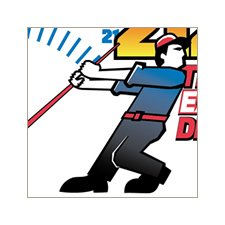 Each year, MFA Incorporated selects a theme for its annual “kickoff” meeting in August. This theme, and its attendant logo, is used for the next 12 months in internal documents, events, promotions and signage. In spring of 2009 I got my first chance to design the kickoff theme for the coming year, which was “212º – The Extra Degree”. This logo was launched at the August event, and received even more widespread use throughout the home office and retail stores than any previous theme logo.

For example, the 2009-2010 kickoff logo (above) was the first logo to be offered on transparent window clings, which became a popular annual product for people to decorate their offices and meeting rooms with. Some offices still have this logo on display.