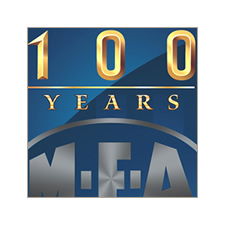 In 2014, MFA Incorporated celebrated its 100th anniversary in a wide variety of ways, including an historic members’ meeting in Sedalia, Missouri, a book chronicling the cooperative’s history and legacy, renovations and beautification of the home office, and the opening of a small monument and park on the grounds commemorating the milestone. Central to all these efforts was the design of a centennial logo. After a long design process, the above logo was unveiled internally at the 2013 annual “kickoff” meeting in August, and then publicly at the Sedalia members’ meeting in November.

The logo was designed to substitute for the MFA shield in many uses throughout the year, including apparel, signage, collateral material, banners, a commemorative calendar, the retrospective book and countless other products. Variations for spot-color and one-color environments were also produced, along with a signature “Centennial Lockup”.

As part of the Centennial design campaign, the annual “kickoff” logo was created to incorporate the 100-year MFA shield.

The proper use of these temporary marks was described in an addendum to the MFA corporate standards guide, made available to employees and branch offices via MFA’s intranet.