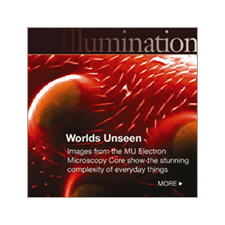 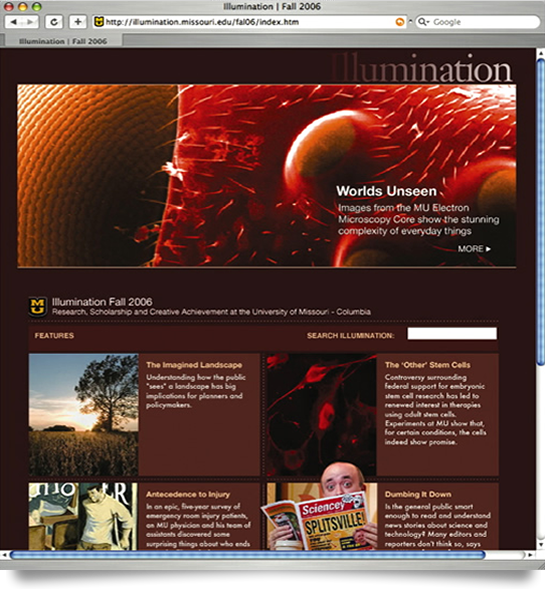 In 2003, I was hired by the University of Missouri – Columbia’s Office of Research to fill a brand new position: Senior Multimedia Specialist. My role was twofold: overhaul the badly implemented Research Division Web site, and create a new Web site for the internationally-acclaimed magazine Illumination, a production of the Office of Research. As Illumination was already a well-known and widely praised publication, creating a proper magazine Web site to suit it was an undertaking not taken lightly. 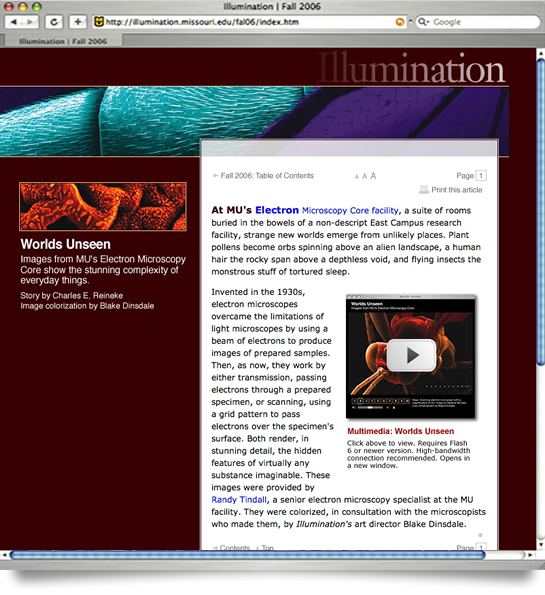 Illumination was (and remains) a highly visual magazine. The design shown above featured a cover story in the main box (the artwork was subtly animated) and other feature stories in the table of contents beneath, which could be searched in the search box provided. But not only was the site’s purpose to showcase the magazine’s incredible artwork and editorial content, I felt strongly that the site should also take advantage of the media to provide additional content to readers, in the form of short animated featurettes. Based on my experience with Flash on the Steve Twitchell project, I began developing 2-3 short featurettes per issue, independently. (Later issues usually featured four.) The production of these featurettes involved meeting with the researchers for a separate interview, writing scripts and then recording the researchers read the scripts in their own voice. These voiceovers would accompany animated illustrations, graphics and slideshows that further explored and explained the subject matter.

The featurettes proved to be extremely popular, and remain a fundamental feature of the Illumination Web site today.

In 2005, the Illumination Web site collected Best of Show in the Interactive category, at the central Missouri ADDY awards. In 2006 the site was awarded a CASE Bronze Circle of Excellence.