What is it like to work as a graphic designer?

It takes a certain kind of person to be a successful graphic designer, especially one who really enjoys doing it and is willing to make a career out of it. It requires a combination of audacity and humility, of confidence in one’s talent and a willingness to cheerfully surrender it to another’s taste preferences. And it demands a willingness to create art that many, many people will see, and be unable to claim any credit for it except privately (or, if you’re lucky, design awards shows).

This isn’t the entertainment business, where everyone who worked on the movie—even the caterers who fed them—gets their names on the finished product. When you put something out there for the world to see, you don’t want the recognition. You want your client (or employer) to get it, and if they do, you’ve done your job right.

I’ve been a graphic designer for most of my life. Even as a child, I was artistic. (I was fully vaccinated.) When I was ten years old, I saw the movie Tron and was captivated by the visual effects and the idea that someone could be digitized and transported into a whole other world inside the computer. But I also found the ENCOM logo…. compelling, somehow. I drew it on paper, colored it, cut it out and taped it to my dad’s car doors. I taped it on our garage door, too. (I was a weird kid, I know.) There was just something neat about a car that wasn’t just an ordinary, everyday car… a vehicle that had a company’s logo on it was imbued with purpose, or something.

It wasn’t anything my little 10-year-old brain could express or describe, but it fascinated me. I was too young to know what it was, but I’d become aware of corporate identity for the first time.

When I was in college, I started my first graphic design business with a partner (who still operates the business today). Up to then I’d mostly done things like résumés, restaurant menus, t-shirts, some small business advertising, and so forth. However, one of our first big clients was a local McDonald’s franchise, and at one point the franchise owners made available to us a thick book that had been put together by Kragie/Newell in Des Moines. It was their McDonald’s brand bible. It was the coolest thing this aspiring designer had ever seen: how the various McDonald’s logos and marks were meant to work. How ads should be laid out and balanced. What typefaces to use. How colors could be combined. How the characters (like Ronald and the Hamburglar) were meant to be portrayed. I could see the brilliance and the depth of thought that went into McDonald’s corporate branding, stuff you just don’t even think about, but makes all the difference in the world when it’s consistently done right. Before then, I was producing ads the way I just… thought they would look good. Upon studying this book, I started to pay attention to how different corporations presented themselves. I could start teasing out the invisible “rules” that guided how their logos were presented. I wanted not only to create great looking and effective designs and graphics, but I realized that I really wanted to be the guy who created those rules, too.

Today I’m the art director for a $1.5b agricultural cooperative in the heartland of the US, and I’m doing everything I ever dreamed of and then some. In 2010, the cooperative rolled out its first major corporate rebranding in 30 years. I got to create the new logo and all its various permutations. I created a standards guide for it, that codifies all those things that keep a brand distinctive and uniform no matter how or where it’s used. I designed livery for our fleet trucks, and massive graphics for our 52′ van trailers. I designed a new template for our print advertising, which is seen all over the Midwest. I designed our Web site, which gets visitors from all over the world.

This is enormously fulfilling to me. When I see my work out there in the world, representing my cooperative and hopefully improving its image and credibility among farmers and the people who support them, I feel uniquely proud. I feel like I’m making the world just a little bit better, even though none of those farmers know who I am. When I see one of our trucks go past on the road, with my livery on it, I smile to myself. I think, that’s one of my trucks. If only my 10-year-old self could see me now… actually, he kind of does.

The pride I take in what I do does not come cheap or easy. I work very hard, often coming back to the office on evenings and weekends when it’s quiet, so I can concentrate on a project without any interruption. I have to be available in the office to everyone else, so I’m here during the day too. I work with many different people in different divisions all over the company, as well as people at our retail locations calling in from all corners of the territory. I have to be able to listen to these people, and understand what they’re looking for even when they don’t really know how to express it. (Fortunately, they usually do, but not always.) I have to deliver work that will do what they need it to do, and I don’t always have the final say in that. Most people who’ve been working with me a while trust my advice, but sometimes they just want what they want, whether or not I think it will be effective for them. I have to be able to either communicate that it will not work, or if I can’t, try to deliver as good of a product as I can that meets their expectations.

At times, the job can be downright nerve-racking, and not everyone understands the amount of time that some projects take to produce. When raw copy and information is delivered to me late, incomplete or incorrect (or all of the above), it impinges on my sleep, my leisure time and my sanity. But the upshot of this is, when I deliver the finished product in spite of these unfortunate setbacks, on time and done right, I get to look like a rock star to my bosses, who do appreciate my efforts. So while sometimes the job is more than a little demanding of one’s time, the emotional payoff can be high when you’re looking at a finished, great looking printed product in your hands that you’d personally made possible because you busted your ass for the past three weeks straight.

I enjoy the creative outlet and the constant challenges. I enjoy getting to work with powerful computers (and big screens) in a comfortable, white-collar office environment. I enjoy working with other communications professionals I respect and who respect me. I enjoy having flexibility in my hours, such that if I’m at the office till 2am some night, I can email in and tell my co-workers, “I’ll be in around 10 tomorrow.” I enjoy that I’m considered a professional, and I make a decent salary—not getting rich here, but it’s not a bad living.

And I take comfort in the fact that my talent and skills will never be obsolete. The economy rises and falls, the fortunes of companies expand and contract. But communications is vital. Every business needs to communicate, and everyone needs their visual communication to look the best it can. No job is 100% rock-solid safe, I know that. But I went into a strong field where there will always be demand for talented, experienced people who aren’t afraid to work hard. It’s a good job, and there’s really nothing else I’d rather be doing.

There’s one other thing about this job that I feel extremely fortunate for. In 2014, this cooperative celebrated its 100th year. I was tasked with creating a graphic identity for the centennial event, at the center of which was a logo. 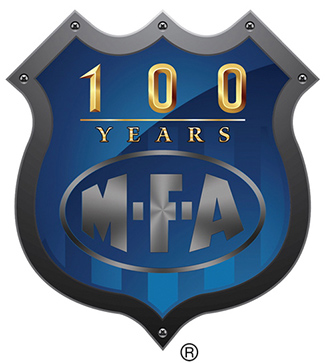 For that year, this logo was on absolutely everything we did. As part of the Centennial, a lot of historical research was done. I got to see a great deal of photography, artwork and artifacts spanning the last century, all with the company’s branding. I feel particularly lucky to be here, doing this job, at this particular point in time. Because the work I did for the Centennial is now a part of this proud organization’s history, and it will continue to be, for as long as it lasts. That’s a kind of indelible mark I was given the opportunity to make, the likes of which many creative professionals work their entire careers and never get to do.